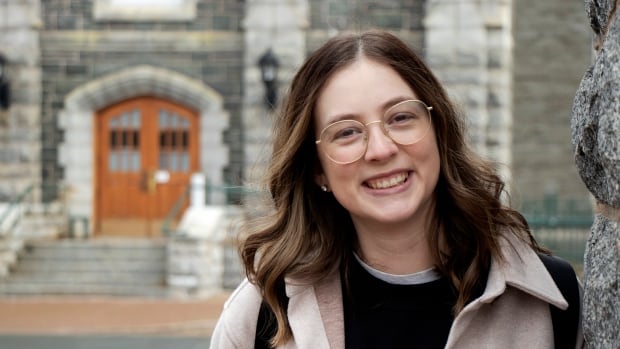 Laura Eamon was a few months into her first semester at Carleton University in 2011 when she was taken from a residence party to hospital by paramedics.

Embarrassed by being carried out in front of her fellow students, her mindset changed when she was discharged and returned to campus in Ottawa.

“People are cheering and chanting, and like, ‘Oh, my God. You’re the girl that got taken by the ambulance. You drink as much as I do,'” Eamon said. “It was almost like a badge of honor.”

It wasn’t the only time Eamon, originally from Hammonds Plains, NS, went to hospital because of excessive drinking.

From 2008 to 2013, alcohol was a big part of Eamon’s life. Her struggles with alcohol eventually led her to drop out of university.

But Eamon is now back at university, this time at Saint Mary’s in Halifax. Sober for more than eight years, the 28-year-old just landed a prestigious Frank H. Sobey scholarship worth $ 35,000, one of nine given out annually to undergraduate business students in Atlantic Canada. She has a year left in her studies.

As part of her application for the scholarship, which included reference letters, written essays and an interview process, Eamon talked about her sobriety.

Eamon started drinking when she went to CP Allen High School in Bedford, NS, and liked the confidence it gave her. She believed alcohol was part of the package that included new friends, big parties and adventure.

‘The alcohol sort of took over’

Even though Eamon skipped a lot of classes, she kept her grades up. She graduated in 2011, and wanting to go somewhere bigger than Halifax, she decided on Ottawa.

“And when I got into university, the alcohol sort of took over,” Eamon said.

In her first year, she lived in residence. She failed a few classes and barely scraped by in others, missing a lot of instruction time along the way.

Eamon headed home for the summer with a friend, Kassie Nadler. The two split a place in downtown Halifax, but Nadler left after about a month.

“She packed up all of her stuff and said, ‘I can’t do this anymore. It’s impossible to live with you and you’re ruining my time here. You’re sick and this is too much. Something’s got to change. And I’ll see you in Ottawa in September, ” said Eamon. “And she left.”

The experience was a first for Eamon. No one had told her that her drinking was problematic.

Nadler told CBC News this was actually the second time she had a conversation like that with her best friend. The previous time was during their first year of university.

Then 18, the pair would often head to nearby Gatineau, Que., Where the legal drinking age is 18, so they could go to clubs. Eamon would often black out from drinking.

“I can’t take care of you in those moments where you need me to,” Nadler told Eamon at the time. “And I’m not physically capable and I can’t make sure you’re safe, and it puts me in an uncomfortable position.”

For their second year of university, the couple lived off-campus and had other roommates.

Eamon said she knew something was wrong when her roommates were able to balance their studies, work and maintain a social life, but she couldn’t.

“They were thriving, and I was sad and lonely and sick,” Eamon said.

Within a week, she dropped out. She got a job and worked to pay for her rent and alcohol.

Early the following year, Eamon moved home. She continued drinking, couch-surfed and worked a series of jobs in retail and reception when she wasn’t calling in sick for the day.

“I feel bad for all the customers who I dealt with… I was pretty haggard-looking and rough around the edges, probably cranky all the time,” Eamon said.

One day that summer in 2013, she woke up in a hotel room and didn’t know where she was.

She went to her first AA meeting that night and cried the entire time. At the end of the meeting, she had a realization.

“How can you go to a bonfire or the beach or, you know, a cottage without drinking?” said Eamon. “I was, like, sobbing to this woman, just so concerned – not that I had woken up downtown in a place where I didn’t even know existed, but because I was worried about going to the beach without alcohol.”

Eamon wasn’t ready to quit drinking, but on Nov. 9, 2013, she went to AA after she was sexually assaulted.

“I knew I didn’t want to ever be in a situation like that again if I could help it, and the only thing I could control was my own actions,” Eamon said. “And that’s really where my sobriety started.”

Eamon has been sober ever since. She said being surrounded by people who had similar experiences helped her maintain her sobriety. Her father was also an important resource. He was also a recovering alcoholic who had been sober since before Eamon was born.

Growing up, Eamon attended meetings with her father on his sobriety birthdays.

Life without alcohol was different. She didn’t have mysterious bruises and pulled muscles and other injuries. Eamon also noticed she suddenly had extra money. It wasn’t just the money saved from not buying alcohol; it was things like not buying fast food while drinking or the morning after, and not missing work and wages.

“All of a sudden, I was experiencing joy,” she said.

Eamon is now a stepmom. Her partner has two kids from a previous marriage.

She also got a degree in medical office administration and started working in the health-care system, but she longed for a bigger challenge and applied to Saint Mary’s University in 2017 and started attending the school.

She’s balanced working in different positions – she’s currently a project co-ordinator with the Sackville Business Association – and going to school while taking less than a full course load.

Since giving up drinking, it hasn’t been all joy for Eamon. Her father died due to cancer and Alzheimer’s disease, and her mother had a brain aneurysm, but has fully recovered.

Finding the money to pay for school has been another challenge. Needing a “Hail Mary,” she learned of the Sobeys scholarship. Looking at the past recipients, she felt intimidated by their success.

“And my partner was just saying, you know, ‘You’re pretty incredible, too. Why don’t you apply?'” Eamon said.

Part of the application process included talking about volunteer experience. Eamon’s volunteer work includes sitting on the board of the Sackville Rivers Association and acting as the communications chair for the organization, which is the community where she now lives. She’s the treasurer of the Saint Mary’s University Environmental Society.

Eamon is also involved with the Halifax Recovery Society, a non-profit focused on breaking down the stigma of mental health and substance-use disorders. For their 2021 Recovery Day event, Eamon told her story.

Breaking the stigma of addiction

Julie Melanson is the society’s founder. She said when people like Eamon tell their stories, it helps break down the stigma.

“People are able to relate,” Melanson said. “They could hear themselves through that story and know that they’re not alone, so it’s incredibly important for stories to be shared, like Laura’s, in a place where it’s public, where it can be viewed, not behind closed doors, because we need to normalize conversations to really break that societal stigma. “

“It really shows that we can recover, we do recover and we do succeed in great ways, so it’s absolutely phenomenal,” Melanson said.

While on opposite ends of the country, Nadler and Eamon remain friends. They’ve also taken road trips together over the years. While Eamon’s confidence has grown, in other ways it hasn’t changed.

“She was still the same Laura that I met on the first day that I went to Carleton for the group tour, still just funny and outgoing and social and very interested in the world around her and in the people that she surrounds herself with,” said Nadler.

When Eamon learned she had won the scholarship, the celebration was simple: she and her partner got Chinese food.

“I think I’ve turned into a homebody and I’m comfortable with that,” she said. “And it’s the little things that make a difference now.”

There are resources in place for Nova Scotians needing help with addictions. The province’s mental health and addictions line can be reached by phone at 1-855-922-1122.