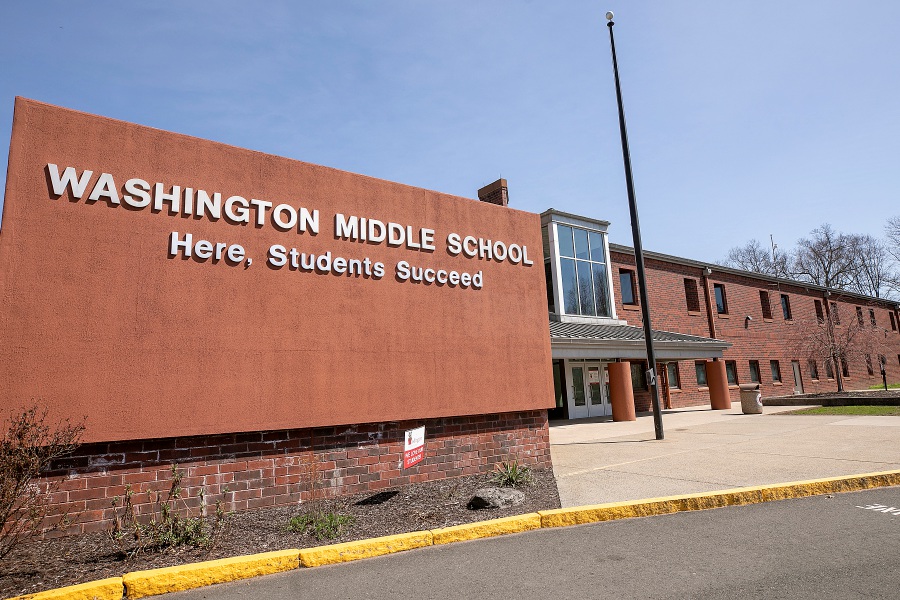 MERIDEN – Ray Southland’s decades-long career as an educator, administrator, coach and wrestling official, during which he inspired scores of students, families and fellow educators, will be commemorated through a scholarship that now bears his name.

That scholarship will benefit students who attend Washington Middle School, which Southland led as principal until his death in 2019.

Colleagues and families who have known Southland over the years described him as a passionate educator who cared deeply about his students. Southland held high expectations for students and athletes who entered his classroom, the gymnasiums where he coached and officiated and the building he led.

Southland’s practicing principles were the basis for what educators now call “The Washington Way.” Those principles are inscribed on Washington’s walls.

“The scholarship is really about personal character and commitment to making a positive difference,” she said. “And improving yourself through education. Ray clearly believed in hard work and also felt that it must be balanced with kindness and compassion for others. That was how he lived his life. ”

Applications for those seeking to become the first cohort of Ray Southland Memorial Scholarship recipients are due on May 4.

The scholarship application states that Southland “dedicated his life to helping our youth succeed, choosing education as the way he could make the greatest impact.”

It states the scholarship itself is “about personal character and the commitment to making a positive difference, starting with improving oneself through continued education.

“The scholarship pays homage to Ray Southland by challenging us to emulate those qualities upon which his legacy as a respected educator, leader, coach, mentor, and friend was built,” the scholarship application states. Southland believed that one must balance hard work with compassion.

“Mr. Southland believed self-awareness and being open to personal change was the foundation for self-improvement and learning. He lived with uncompromised personal integrity, ”the application stated.

Southland graduated from Maloney in 1979. In his career as an educator he taught business and marketing, as well as career and technology education. He coached wrestling, served as athletic director at Maloney, and served as assistant principal and principal at Washington.

“He was phenomenal,” said Jennifer Straub, Maloney’s principal, of Southland. “A friend to all, a mentor to many.”

“I’m thrilled,” Straub said of the opportunity to offer the scholarship. “I’m personally and professionally so excited about it. Losing Ray was very difficult for many. I think this is a great way to memorialize him, and honor his memory. He was from here. He grew up in this community. I’m full of pride for Ray. “

Whether Southland was teaching in the classroom, leading a school building, or whether he was a coach, athletic director, or on the wrestling mat officiating a match, there was a common thread – he loved the kids, Straub and others said.

Ray Mainville, a former teacher and wrestling coach at Maloney, coached Southland for three years in high school. Mainville and Southland stayed close over the years that followed, with the elder Mainville having mentored his former pupil during his time as an educator and coach.

“He was like my son – that’s how close I was to him,” Mainville said. He described Southland as a very caring individual, who set high expectations for others and for himself. He knew how to connect with students, regardless of their backgrounds.

“He was great at that,” Mainville said.

“He worked hard for it and he expected people to work hard,” Mainville said. “… He was stern, but yet, very caring. He had a heart of gold. He would do anything for you to try to help. ”

Meriden School Superintendent Mark D. Benigni said he first met Southland when he was 22 years old, early in his own career as an educator. The two of them taught together at Platt, and later served as administrators at Cromwell High School, before reconnecting in Meriden.

“Ray was a compassionate educator who truly cared. I miss my friend and colleague and I am thrilled his memory will live on through the generous scholarships in his name, ”Benigni said.

Benigni said he hopes the scholarship is given to students who embody Southland’s qualities: “a hard worker, who is also good to others and concerned about the entire school community. That’s an important factor – because that’s how Ray lived his life, “Benigni said.

Meriden Board of Education President Rob Kosienski Jr. similarly described Southland as a “legendary educator” in the Meriden Public Schools, who was also extremely dedicated to the sports community.

“He had an incredible relationship with the community,” Kosienski said. “… Ray’s legacy is just positivity and collaboration with people.”

Debbie Martinez, a Meriden resident and parent whose children attended Washington, knew Southland well, in large part due to her involvement with the school’s Parent Teacher Group.

Martinez said she is very glad to learn that something in Southland’s name has been established – “to keep his legacy alive,” she said.

“He really was one of the most impactful educators,” Martinez said. “He wasn’t just a principal.”

“He included everyone,” Martinez said. “He was probably one of the biggest supporters of parental involvement that I’ve ever seen.”

To learn more about the Ray Southland Memorial Scholarship and to submit an application, contact Jessica Showerda at [email protected]

Reporter Michael Gagne can be reached at [email protected]