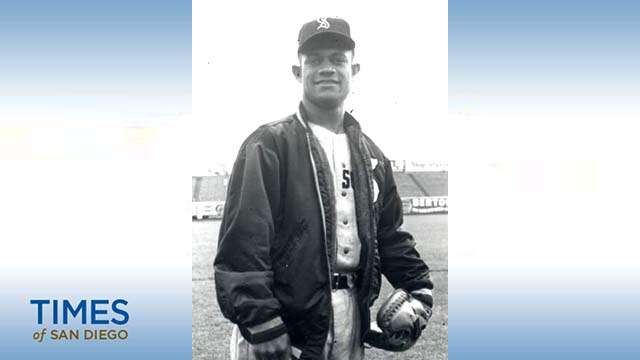 The San Diego Padres will recognize the recipients of the Johnny Ritchey Breaking Barriers Scholarship at Friday night’s game against the Atlanta Braves at Petco Park in connection with the 75th anniversary of Jackie Robinson breaking baseball’s color line.

The scholarship was created in 2020 and is awarded annually to San Diego County high school seniors from underserved areas who embody the characteristics and qualities Ritchey displayed on and off the field, including the capacity to overcome adversity and break barriers academically, athletically or in the community .

Nominations for the scholarship were submitted online accompanied by 1,000-1,500-word essay between 1,000-1,500 words describing how they have encountered and overcome personal barriers based on their experiences. Each recipient will receive a $ 5,000 scholarship towards the continuation of their educations.

The plaque includes a quote from Ritchie: “It was a thrill to play for the Padres. The fans cheered and my feeling was it was because I was a San Diego boy making good. It had nothing to do with race. ”

Ritchey was born and raised in San Diego and graduated from San Diego High School. He was a star member of the Post 6 American Legion baseball team, but was not allowed to play in national championships held in the South because of laws forbidding integrated athletic competitions.

Ritchey also played at the then-San Diego State College. Ritchey’s time in college was interrupted by serving in the US Army for 27 months during World War II in a combat engineering unit, seeing service at the invasion of Normandy, the Battle of the Bulge and in the Philippines, rising to the rank of sergeant staff. .

Ritchey returned to San Diego State following the war and was the Aztecs’ leading hitter in 1946 with a .356 average. He began his professional career in 1947 with the Chicago American Giants, leading the Negro American League with a .381 batting average.

Ritchey batted .323 as a rookie with the Padres in 1948, one year after Robinson made his debut with the Brooklyn Dodgers.

All players and other on-field personnel will wear Robinson’s No. 42 Friday as they have done on each Jackie Robinson Day since 2009. For the first time, all teams will use Dodger blue for their “42” jersey numbers, regardless of their primary team colors.

“42” patches with team-specific uniform colors will appear on Nike uniform sleeves and on New Era caps. MLB will donate all licensed royalties from the sales of caps to the Jackie Robinson Foundation, founded by Rachel Robinson in 1973, the year following her husband’s death at the age of 53. It provides four-year college scholarships to disadvantaged students of color.

The number 42 was retired throughout Major League Baseball in 1997, on the 50th anniversary of Robinson’s April 15, 1947, debut with the Brooklyn Dodgers.

An MLB-produced video, “Play, Run, Win, Rise,” will be shown at all stadiums on Jackie Robinson Day, reflecting on his legacy as a Hall of Fame and trailblazing player, social justice advocate, civil rights icon and pioneer in business and broadcasting.

The video also highlights the critical influence Rachel Robinson has had on their family’s legacy, particularly through the Jackie Robinson Foundation.

Robinson went hitless in four at-bats in his major league debut, but scored what proved to be the winning run in Brooklyn’s 5-3 victory over the Boston Braves in front of a crowd announced at 25,623 at Ebbets Field.

Robinson played his entire major league career with the Brooklyn Dodgers, helping lead them to six National League titles during his 10 seasons, and, in 1955, their only World Series championship in Brooklyn.

Robinson’s successful integration of Major League Baseball is credited with helping change Americans’ attitudes toward Blacks and being a catalyst toward later civil rights advances.

“Seventy-five years ago, Jackie Robinson took the field under incredibly challenging circumstances and unimaginable pressure. Yet through his courage, character, skill, and values, he brought well-needed change to our game and advanced the civil rights movement in our country, ”MLB Commissioner Robert D. Manfred, Jr. said.

“During this special anniversary year, it is a top priority for MLB to honor Jackie’s contributions and legacy, recognize the impact Rachel has made through the Jackie Robinson Foundation, and continue to keep Jackie’s memory and values ​​alive for today’s generation of players and fans. ”