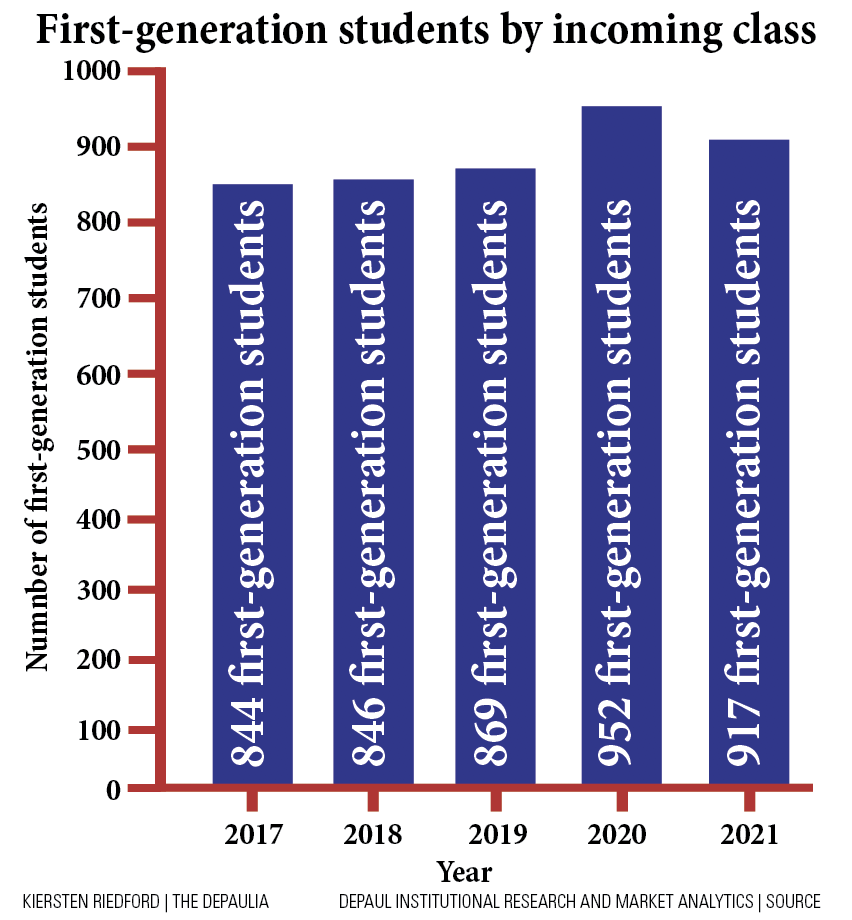 The scholarship will be available to first generation undergraduate or graduate students at DePaul, according to SGA Vice President Kevin Holechko. Its goal is to help cover the cost of textbooks and other extra academic costs these students may face.

“We wanted to take a practical approach and work to actually do something that will make a difference on campus,” Holechko wrote in an email to The DePaulia. “We decided that we wanted to help with one of those hidden costs that are not talked about in higher education.”

Holechko said the precise number of recipients, as well as how much financial aid will be provided, is still unknown.

“That information is still being worked on with our partners in the Office of Multicultural Student Success (OMSS) and student affairs,” he wrote.

Approximately one in three students at DePaul are considered “first-generation,” defined as the first in their families to earn a college degree, per Newsline. Nationally, only 27 percent of these students actually attain their degrees within four years, significantly less than their continuing generation peers.

“There’s definitely a lot of educational, economic, and social barriers that first-generation college students face across the board,” said Sergio Godinez, SGA’s Senator for First-Generation Students. “The whole basis of this scholarship was to create some kind of equitable scholarship funding for first-generation college students so they can access more opportunities here at DePaul.”

While the exact dollar amount of the scholarship is still unknown, Godinez said the scholarship can be used to cover a variety of academic costs, including the study abroad program.

“A lot of first-generation families are also low-income families, so study abroad is not always affordable for them. The scholarship can be used towards that, ”Godinez said. “It can be used towards getting textbooks; it can cover transportation costs. ”

SGA’s scholarship is in partnership with DePaul’s OMSS. The office already houses Generation Success, an initiative tasked at supporting first-generation students at DePaul by connecting them with scholarships, internships and other opportunities.

“Picking OMSS seemed like a no-brainer decision to us,” Godinez said. “They’re dedicated to supporting first-generation college students, so it seemed like a perfect pairing. We’re glad that OMSS took up the opportunity with us. “

As a first-generation student himself, Godinez understands the struggles that many of his peers endure when coming to college.

It’s this experience that drove Godinez to represent his fellow first-generation students for SGA and push for opportunities like the scholarship.

Cost of attendance is an important factor for 97 percent of prospective college students, according to the National Center for Education Statistics. For freshman first-gen student Carolyn Espinoza, that’s why she chose DePaul in the first place.

“I watched my parents struggle a lot, so as I grew up, I realized that I did want to go to college and build that education in my family,” she said. “DePaul just met my financial needs, so I ultimately chose to come here.”

Espinoza said she hadn’t heard of SGA’s new scholarship until now. But she is excited to see how it could benefit first-generation students like herself.

“I know when I was graduating high school, there were a lot of kids in my class that were struggling to make ends meet,” Espinoza said. “I was struggling to choose a college because I didn’t know what was possible for me to pay. I know [the scholarship] could help other students out. It’s just one less stressor that they need to think about. “

Now that she knows about the opportunity, Espinoza said that she’ll “for sure” be looking into applying when it becomes available.

Godinez is encouraged by the potential for the scholarship. But for him, this is just the beginning.

“Looking long-term, I hope this scholarship sets up a path that DePaul can follow,” Godinez said. “Within my next couple of years here at DePaul, I want to ensure that this scholarship is not the only one that’s offered for first-generation college students.”

The details of the Student Government Association Academic Resource Scholarship are not yet finalized, but it should be available to students in the Fall quarter of 2022.