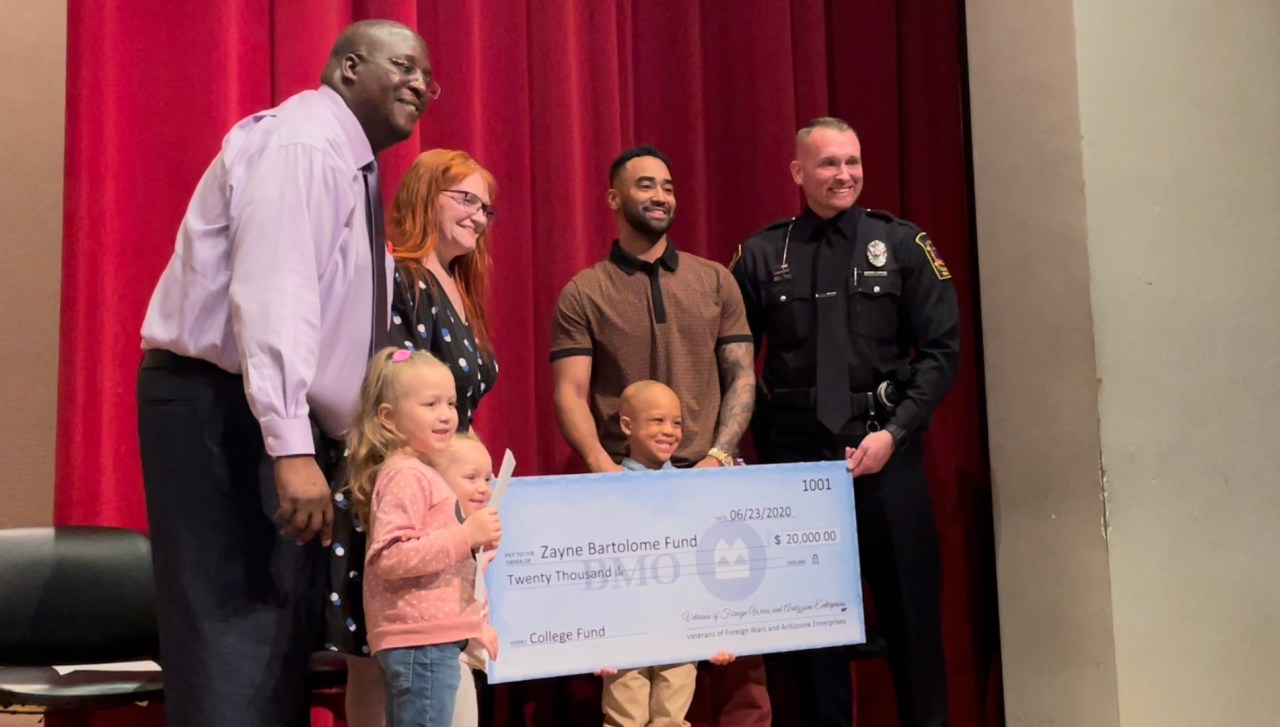 INDIANAPOLIS – “When we call on duty, when we go 10-41 we don’t even think it will be the last time that we will see our family,” said Dick Lineberry, state commander for the VFW Air Force Post 2457, as he stepped up to the podium Wednesday night at Southport High School.

For the family of Indianapolis Metropolitan Police Department Officer Breann Leath, the unimaginable call came on April 9, 2020 when Leath was shot and killed in the line of duty while responding to a domestic disturbance on Indy’s east side.

The military veteran and 2.5-year veteran of the IMPD was only 24 years old when she died, leaving behind her young son, Zayn.

“He’s got her goofy sense of humor and loves to laugh, and it’s just nice to see that little light in him,” said Jennifer Leath, Breann’s mother. “We miss her, but I’m glad that he’s here.”

On Wednesday, members of the community gathered with the Leath family to pay tribute and honor the sacrifice that Bre made to the Indianapolis community. The event was held at Southport High School, where she graduated from in 2014.

“I want to thank everyone here today who are showing young Zayn just how much his mother meant to her city, to her neighbors, to her colleagues, to her community and to her brothers and sister in law enforcement,” said Indianapolis Mayor Joe Hogsett . “It’s in generous and humane moments like this one that Breann’s example lives on.”

Fellow IMPD officers, area law enforcement and military veterans, including the Indiana Patriot Guard, were in attendance as Officer Leath’s now 5-year-old son, Zayn, was presented with a $ 20,000 check, which will be placed in a trust fund to be used for his college education.

Jennifer said education was very important to Breann and their family.

“The fact that they haven’t met her and are still doing things in her name because they want to support Zayn, is really important as well. He needs to know how much his mom meant to not only us but to the community that she loved, ”Jennifer said.

The idea to raise the money for Zayn and show him the community was there to support him and their family, was spearheaded by Perry Township Police Department K9 Officer Ronald Capps.

“I was working the day that she was killed and something about that just traumatically hit me where I felt like I needed to reach out and help,” Capps said.

Capps, a fellow veteran, never had the opportunity to meet Breann, but knew her father Tommy through the Marion County Sheriff’s Office. When Tommy told him that Bre had a son, he knew he needed to help in any capacity he could.

“I went out and started collecting money and was able to gather individuals from the community and state of Indiana to $ 10,000,” Capps said. “This is unconditional love. This is gonna be sitting here until he’s 21. It started when he was three. “

He did that in a matter of just four days before turning to MCSO Deputy Chief and CEO and President of Ardizzone Enterprises, Tony Ardizzone, for help setting up a trust fund and trying to raise $ 10,000 more.

“This is kind of emotional for us,” Ardizzone said. “I just can’t even imagine losing one of my children, it was just devastating for them.”

Ardizzone, like Capps, knew both Tommy and Jennifer through their jobs with the MCSO. He said it was a no brainer.

“I just feel like it’s our obligation to do that. This lady gave her life to this community, ”said Ardizzone.

The Leath family expressed their appreciation to those who made the donation possible as well as those who have worked to keep Breann’s memory alive since her passing.

They continue to hear stories of the good she did and the way she helped others both on the job and off.

“I’ve said many times, but one wants to be forgotten and you know that you left an impact on people,” Jennifer said. “I think that Breann has always wanted change and she wanted to make a change and I feel like the community definitely has stepped up knowing her wishes. I think they have continued to do that and support us and they support Zayn and I mean, you couldn’t ask for more. ”

“I’m really thankful for that it just shows the appreciation of our daughter,” Tommy said.

Bre used her 24 years to shine a light during her every day encounters with people whether she knew them or they were complete strangers. That’s why those who know her encourage everyone to “Be like Bre.”

They also encourage anyone who might have a story about Bre to share it with Zayn as he grows up, hoping that one day he will understand the difference his mom left in the world since he was so young when she was taken from him.

“If people want to do something forward, if you see Zayn you have a memory of Brianne just tell him as he gets older. I think it’s important to share the stories of Breann with him, ”said Jennifer. “I think he misses out on his mom so that’s the way he can get to know her.”

For anyone who is interested in honoring Officer Leath, a blood drive will be held this Friday, April 29 at the IMPD East District in partnership with the American Red Cross.

The 2nd annual Breann Leath Memorial Blood Drive will be held at 201 N. Shadeland Avenue at the IMPD East District Headquarters from noon to 6 pm You can register by visiting this link.