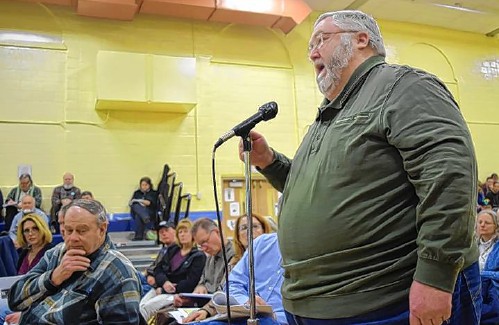 The Wilton-Lyndeborough School District has started a new scholarship, in honor of longtime School Board member and avid Wilton town volunteer Harry Dailey.

Dailey was born in Lowell, Mass., And graduated from high school there. Prior to his retirement, he was a district manager at Staples. He survived by his wife, Gisele Dailey, children Amanda Dailey and Stephen Dailey and his grandson Cody Comire.

For many people in the town, Dailey is remembered for his work both in the school district and the town, where he served for years on various committees and subcommittees.

“Harry was a tremendous asset to our community,” said School Board Chair Jim Kofalt, who worked on the board with Dailey for years. “He was instrumental in the [Florence Rideout Elementary School] construction project and many other initiatives that have helped to build up our community. He will be deeply missed. ”

The new scholarship program will help a graduate of the district fund post-secondary educations. To be considered for the scholarship, students are required to submit an essay on the importance of community service – a virtue Dailey exemplified.

Following his passing, stickers were made in Dailey’s honor, bearing a four-leaf clover in honor of his Irish heritage and the phrase “Show up like Harry” to encourage people to become involved in their community.

“He was outgoing, and had a heart of gold, and I always thought of him as an unselfish person,” Hughes said. “That was Harry. You could rely on Harry to be there. Every election day, you could find him at the polls. He would do whatever it took to get the town government to function for the good of the people. ”

Dailey was awarded Wilton’s Citizen of the Year in 2016 for his work for the town and school.

“He earned it the hard way,” Hughes said. “He’s left a hole in town government.”

Select Board Chair Kermit Williams said the award was given at a time Dailey was stepping down from some of his service positions, and was in recognition for his body of work.

“He did a bunch of things for town,” Williams said. “He was very dedicated.”

In addition to his elected positions, Williams said Dailey worked on various appointed committees to focus on narrow issues like the town employee pay scale and annual review procedures.

“He was a larger-than-life figure, and people listened to him,” Williams said. “He was willing to put in a lot of time to help people, especially kids.”

Hughes said he met Dailey through this School Board work first, but was thrilled when Dailey approached him about joining the town Budget Committee.

“His knowledge and wisdom of the town were invaluable to the committee,” Hughes said. “He was a true public servant. It wasn’t about Harry. It was about serving the public, and he was an example to anyone that wants to be involved in municipal service. ”

Hughes said Dailey was “always to the point,” but “to the point with humor.”

“He was a good listener, but you knew where he stood on an issue, or anything that required him to express an opinion,” Hughes said. “Before we worked together on the Budget Committee, I would always look forward to what Harry had to say at Town Meeting from his seat on the bleachers, making his points on having fiscal prudence, but always making sure the town was also well-served . ”

Geoff Brock, a former WLC School Board Chair who worked with Dailey, said he was always a big proponent of the public school.

“He wanted all the kids to have a fair chance, and he wanted the schools to improve, and he worked very hard for both of those things,” Brock said. “He always stepped up.”

Dailey was instrumental in a recent project to renovate and put an addition on the Florence Rideout Elementary School, and was often on-site to ensure the process was working smoothly, Brock said.

He was also a coach for soccer and basketball with the Wilton Junior Athletic Association and often participated in fundraising events, manning the grill at chicken barbecues.

“He loved all sports, but he really loved basketball,” Brock said. “And all the kids knew him, and everyone seemed to like him. He knew a lot of people and he cared about everyone he knew, and he backed it up with his actions. ”

“He was a very dedicated youth sports coach, and he helped kids figure out what they needed to do to be successful both in sports and in life,” Williams said.

Hughes said a scholarship was a fitting memorial for Dailey.

“It’s the perfect tribute. For the student that gets it, it will be quite the honor, ”Hughes said.

“He would have liked the idea that he was remembered for his work with the school,” Williams agreed.

Anyone who wishes to contribute to the scholarship fund should contact Linda Draper at 603-732-9340, or via email at [email protected] Checks may be made payable to WLC and should include a note that the contribution is for the Harry Dailey Memorial Scholarship Fund. Donations may be mailed to 57 School Road, Wilton, NH 03086.